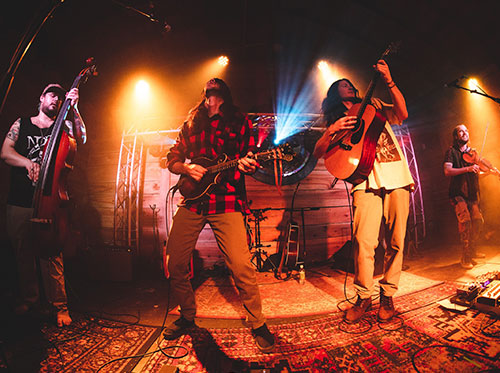 Nashville’s psychedelic punk-grass rockers, Sicard Hollow, grew up sick of any existing institution telling them who and what to be. Now, as they navigate adulthood, they’re equally tired of the music institutions telling them what their music should sound like— so they dunked it in patchouli and a skate-and-destroy ethos that brings an enduring sound into the modern age.

Before the band met in 2018, none of the members ever considered playing bluegrass. Matt Rennick (violin) was working on electronic music, Will Herrin (mandolin/vocals) was playing guitar in rock bands, and Alex King (guitar/vocals) was barely playing music at all. After a few jam sessions, the bluegrass just kind of happened. Since adding Parrish Gabriel (bass) in the Fall of 2019, the band has been on a journey of self discovery within the genre while challenging themselves to make it their own. Whether it was skateboarding or chasing jam bands, singer/guitar-player Alex King always had a fierce desire to succeed on his own terms. He spent years as an artist without an art-form, searching for a home by pouring every bit of his sweat and heart into anything he was doing. “It took years for me to land on music,” King says, referencing “This I Know” from the album, “but when I found that fire inside my heart, I found my home.”

It just so happened that finding that home coincided with the shutdown of live music due to the pandemic that canceled the entire release tour supporting their debut studio record, ‘Secret of the Breeze.’ During that time, the band turned inward to reflect on their identity and how they could add their generation’s voice to a timeless genre of music. The result, with the help of producer John Mailander (Billy Strings, Bruce Hornsby) and Recording/mixing engineer Dan Davis (Billy Strings, Zac Brown Band, Dierks Bentley), was a combination of pop-punk melodies, psychedelic instrumental breaks, and existential song-writing all packaged as a bluegrass quartet dressed in tattoos and tie-dyes.

Tracks like Herrin’s “Escape the Unknown,” wrestle with staying true to yourself in a world seemingly fueled by mob-mentality. This positive skepticism toward the main-stream permeates the entire record. Songs like “Forecast of Life” and “Where I’m At” impress a new American-Zen that dances through the chaos with a smile on your face. If unapologetically being yourself is the key to finding the “Brightest of Days” ahead, then you’ll hear it here first from Sicard Hollow.