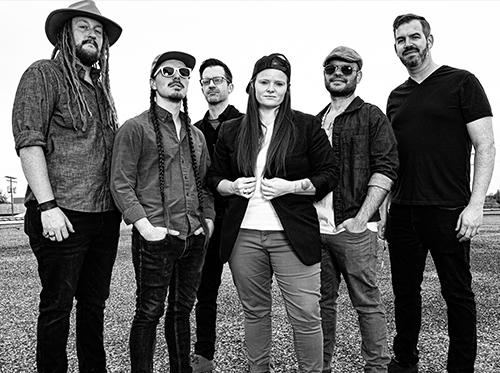 The Mae Simpson band is pure energy and soul. The singer-songwriter Mae, who hails from South Carolina, has a huge voice and stage presence. She has brought together a collective of seven musicians who each bring a unique flavor to this powerhouse group. Formed in the fall of 2017, Mae Simpson Band have built a broad collection of original music that refuses to fall neatly into a single genre. Blistering funk and dance music mixed with soul, blues, country, Jazz, rock, and even a little hip hop. Mae has been a Nominee for  City Pages “Best New Band and Best Live Concert” . Going on to WIN City Pages Reader’s Choice Best New Band. From playing at First Avenue to Dakota Jazz the band can also be seen at a range of music festivals and venues in the region.

“Mae’s powerful voice has remnants of Janis Joplin and Ella Fitzgerald, tied together with a rasp of Joan Jett. Brought together by an extremely talented and passionate band, Mae Simpson Music is a ticking time bomb for breaking into the national array of local artists to make it “big.” – Richard Dollarhide (Music in Minnesota)