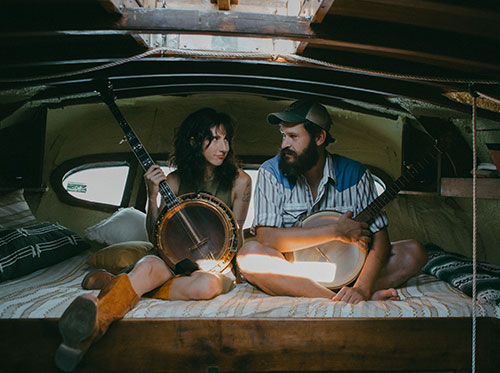 Pairing Kendl’s high lonesome drawl, quick fingers, and twenty years worth of Olympia, Washington’s indie soundscape with Palmer’s sultry Midwestern croon, stoic poetic passion and steady grooves the Lowest Pair have been presenting a mix of the familiar and the transcendental for almost a decade.

When they started the project they knew they wanted to collaborate with different artists, this desire found fruition with the release of The Perfect Plan in 2020, a record with full band drums and electric bass. During the spring and summer of that year, they found themselves camping and sharing songs around the fire with two dear friends and incredible musicians Adam Roszkiewicz and Leif Karlstrom of the instrumental duo “Small Town Therapy”. Founding members of the progressive string band Front Country, multi-instrumentalists Adam and Leif bring a new dynamic palette of colors to Kendl and Palmer’s own instrumental prowess and expressive lyricism.

After sharing a handful of new songs and tunes, (and making immediate fans in the campground) there was no doubt that a record was in the future, and In August of 2020 they spent a week out in Enterprise, Oregon recording at the OK Theater.

The new record “Horse Camp” leans towards each member’s string band roots and showcases brand new Lowest Pair songs Kendl and Palmer wrote during the strange times of the pandemic. The album also includes an instrumental by each musician involved. It’s an awesome display of how a simple collaboration of friends can result in music that is as organic as it is undeniable.