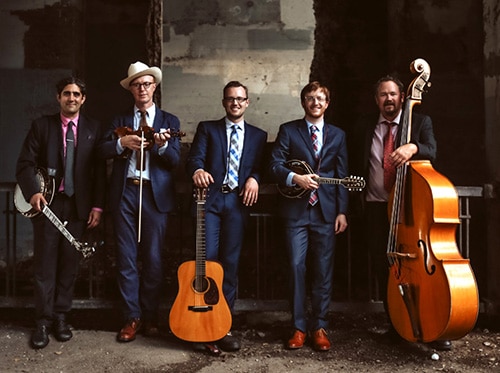 Since forming in northeast Minneapolis in 2006, The High 48s have been making music that combines the soulful sound of classic bluegrass with a modern attitude.
They’re a band with one foot in tradition and the other in the world of music today,  and one of the very few who can find an overlooked bluegrass classic in a song by M. Ward or the Clash then throw down hard on a standard by Bill Monroe.
The High 48s are also a band of songwriters. Here, too, they take a modern approach, heeding the well-worn advice to writers: write what you know. Their songs ring true to their lives as northern city-folk rather than an imagined “sweet, sunny south” of coal mines and dark hollers.
In addition to keeping up a busy performing schedule, the High 48s are passionate about music education and in demand as instructors, teaching one-on-one, online and in workshops and jam camps around the country, including their now twice-yearly bluegrass jam camp for kids, Grass Seeds Academy.
In 2017, the band released their eighth studio album, Daddy Was a Bank Robber. This recording is their most personal release yet, with original music and a handful of covers that represent a musical snapshot of the band’s very eclectic record collections, including songs by alt-country great Robbie Fulks (“Goodbye Virginia”), bluegrass maverick John Hartford (“Long Hot Summer Days”), blues singer/guitarist Little Milton (“Let Your Loss Be Your Lesson”) and the Clash (“Bankrobber”).
In 2018, the 48s welcomed guitar phenom Clint Birtzer into the band. Though only 25 years old, Clint is already a bluegrass veteran, with three Minnesota State Flatpicking Championship wins under his belt as well as thousands of shows and a long back catalog of album releases with newgrassers Sawtooth Brothers.
The band takes its name from railroad slang for the boxcars originally used to transport troops on the front lines in WWI that could carry 40 soldiers or 8 horses, and were later used in the US on fast-moving “hot shot” freight trains by train-hoppers looking for work during the Great Depression.
BACK TO COMPLETE LINEUP