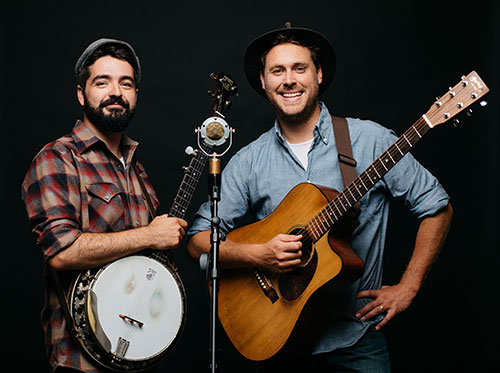 Justin Lansing and Joe Mailander have been exploring the outdoors together since they were kids. Now, as the GRAMMY-winning Okee Dokee Brothers, they write songs to encourage kids and families to get outside and get creative. They’ve built a plaid-shirted national following with their outdoor adventure-themed albums – Can You Canoe?, Through The Woods, Saddle Up and Winterland.

But whether it’s indoors or out, The Okee Dokee Brothers believe that as long as folks are singing together there’s a glimpse of hope for our world. That’s the mission behind their latest release, Songs for Singin’ which invites everyone to join the chorus and sing along.

With songs written under wide-open skies and harmonies fine-tuned around the campfire, a spirit of friendship and adventure is at the heart of their Americana folk music. The Okee Dokee Brothers make room for kids to dance, for parents to share stories, and for everyone to gain respect for nature, each other, and the world we live in.

A full-length Orchestra Program for young audiences is available for touring with scores and parts developed in partnership with the Minnesota Orchestra.