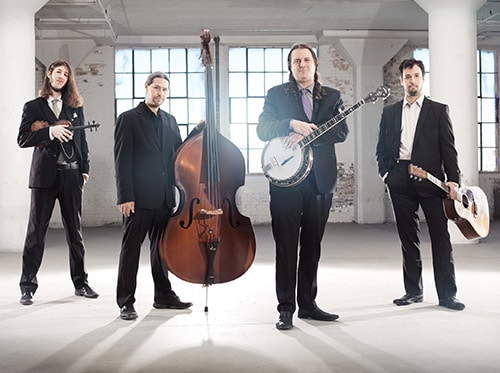 The Henhouse Prowlers are Bluegrass Ambassadors.

Founded over 15 years ago with the simple desire to play original and powerful bluegrass, this quartet now finds themselves at the intersection of performance, diplomacy and education.

The Prowlers have now been to more than 25 countries across the globe, working with the U.S. State Department and under their own nonprofit, Bluegrass Ambassadors – incorporating music from Africa, Asia, the Middle East and more into their already robust repertoire of unique traditional American music.

On stage, in workshops and wherever they are, the Henhouse Prowlers find and spread the commonality we share as human beings through the universal language of music.

You can feel it at every show.

Early in 2019, the banjo virtuoso, songwriter and educator Tony Trischka celebrated his 70th birthday with a surprise party at the Public Theater, in Lower Manhattan, a reasonable jaunt from his home in New Jersey. Naturally for an artist NPR has referred to as “the great banjo liberationist,” the well-wishers included musicians like Béla Fleck, the premier banjoist to emerge in the past four decades, and the comic genius Steve Martin, the banjo’s unofficial celebrity ambassador, whom Trischka calls “a wonderful player.”

At center of the fete—including, all told, “about 80 people I love,” says Trischka—was an unassumingly brilliant, kindhearted fellow who just so happens to stand among the most influential figures in American roots music. Or, as the New York Times wrote in 2006, “[I]n fiddle- and fret-conscious circles from Nashville to Groton, Mass. … [Trischka] is known as the father of modern bluegrass.”

He was born in Syracuse, N.Y., in 1949, and raised in a home filled with music. There were Broadway scores and a sweeping range of classical music, from Stravinsky to Beethoven. (The first thing Trischka learned to play on the banjo, in fact, was the Ninth Symphony.) The wide- open American vistas of Aaron Copland had an especially potent spiritual and visceral impact on him, as did the folk music his left-leaning father held dear. The Almanac Singers, the solo work of its founding members Woody Guthrie and Pete Seeger, and Lead Belly’s children’s LP were in constant rotation.

Trischka fell in love with the banjo by way of the Kingston Trio’s 1963 recording of “M.T.A.,” and was able to experience the New York-centered folk revival by trekking to the Newport Folk Festival in the early to mid-’60s. He moved to the city in the early ’70s and hit the ground running, settling in among a peer group of extraordinary musicians who saw American roots music as a thriving, living language that could be expanded and combined with other influences and sensibilities. Alongside other young masters like mandolinist Andy Statman and fiddler Kenny Kosek, in such units as Country Cooking and Breakfast Special, Trischka found his purpose. Jaw-dropping musicianship was certainly encouraged, as was comic and literary irreverence, earnest songwriting and a record shop’s worth of touchstones beyond bluegrass, from the avant-garde to fusion and R&B.

That’s essentially the m.o. that defines Trischka’s landmark solo debut, Bluegrass Light, released on the Rounder label in 1974. “For the first album,” Trischka recalls, “I was just doing what I loved, music I was hearing.” That’s a characteristically understated way to describe his synthesis of a vast swath of the 20th century’s most interesting sounds: bluegrass staples, Van Dyke Parks’ orchestral psychedelic pop, Coltrane, Eric Dolphy, the heyday jazz-rock fusion of Mahavishnu Orchestra, Chick Corea, Weather Report and Zappa, and more. Many other milestone albums followed, among them 1983’s A Robot Plane Flies Over Arkansas, which refined the eclecticism of Bluegrass Light and featured such West Coast newgrass royalty as violinist Darol Anger, guitarist Tony Rice and mandolinist David Grisman.

For his 1993 release, World Turning, Trischka crafted a wildly ambitious love letter to the banjo and its mighty journey throughout America’s cultural firmament. Trischka’s reputation and goodwill allowed him to retain the services of champion company, here including Grisman, Parks, the Violent Femmes, Alison Krauss, R.E.M.’s Peter Buck and Bill Berry, and even beat icon William Burroughs. That project became an essential source of inspiration for Marc Fields’ comprehensive 2011 documentary, Give Me the Banjo, which Steve Martin narrated and for which Trischka acted as musical director and co-producer. (Musical direction is yet another of Trischka’s gifts, and he’s helmed ensembles for Broadway and off-Broadway productions as well as for New York City’s “Shakespeare in the Park.”) With frequent airings on PBS stations across the country, Give Me the Banjo was one more opportunity for Trischka to advocate on behalf of his chosen instrument.

He’s raised the banjo’s profile in many other ways as well. Through his theme song for Books on the Air and performances on A Prairie Home Companion, Mountain Stage, From Our Front Porch and other programs, he’s been a frequent presence on NPR. His work with his pal Steve Martin too has helped the banjo gain a wider audience and deeper understanding. Trischka’s Grammy-nominated album Double Banjo Bluegrass Spectacular, released in 2007, and Great Big World, from 2014, feature Martin within a mix of veterans and up-and-coming luminaries. He produced Martin’s Grammy-nominated Rounder album from 2011, Rare Bird Alert, which touts performances by the Steep Canyon Rangers, Paul McCartney and the Dixie Chicks. His forthcoming album, This Favored Land, is a visionary exploration of Civil War history featuring an all-star cast—from Michael Daves and Maura O’Connell to the Femmes, Catherine Russell, Guy Davis, the actor John Lithgow and many others.

In many ways, Trischka’s collaborators join him to pay homage to an architect of progressive bluegrass—an invaluable pioneer who absorbed the slings and arrows of roots traditionalists and proved that acoustic music could accommodate imagination and individualism. (Trischka, in his self-effacing way, insists he was simply falling into a longer-running tradition: “Bill Monroe, when he invented bluegrass, took all these other elements and fused them together,” he explains.)

One such apt pupil has been Béla Fleck, who began studying with Trischka as a teenaged bluegrass wunderkind struck by his teacher’s wily, genre-bending original compositions. “He showed up and I knew, almost immediately, that this guy had it,” Trischka recalls. “Very quickly, after a few months, I said, ‘You don’t need lessons anymore. We’ll just kind of play and hang out.’ It’s been that way ever since, and we just have a great relationship.” Musically their connection has been fruitful, to say the least, and on collaborative albums like 1981’s Fiddle Tunes for Banjo, with Bill Keith, and 1992’s Solo Banjo Works their rapport is at once fiery and reflective, competitive and full of compassion.

But Fleck is just one of countless students that Trischka has imparted his hard-earned wisdom to, through his private instruction, his books and DVDs and his groundbreaking work with the ArtistWorks online teaching platform. In addition to his Grammy nominations, he’s earned a number of honors over the years, including the International Bluegrass Music Award for Banjo Player of the Year in 2007, and he was named a United States Artists Friends Fellow in 2012. This momentous coming year, between This Favored Land and other projects and concerts, will no doubt garner Trischka more well-deserved acclaim. “I’m 70 but I’m strong,” he says, chuckling. “I’m not ready to retire yet.”