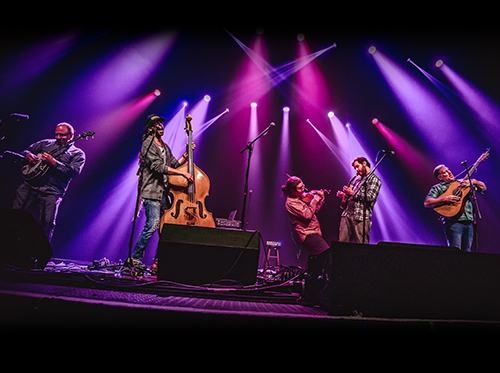 Although Jordan Kroeger (bass) and Ryan Ogburn (mandolin) began their musical relationship in the Wisconsin jamband scene, Chicken Wire Empire began as a 4 piece traditional bluegrass band in Milwaukee, WI.  The band honed its traditional sound, encapsulating it in 2014 with their debut album Chicken Wire Empire.  With half of the group rooted in bluegrass, and the other half steeped in jamband music, a change occurred when CWE performed an Old & In The Way tribute show.  With the addition of Jon Peik (banjo), Ernest Brusubardis IV (fiddle), and Greg Brundage (guitar), a new sound was found in Milwaukee, and Chicken Wire Empire joined the roster of high energy jamgrass.

This journey from traditional to progressive was documented by director Ross Monagle in the film All It Takes, and premiered in 2016 at the Oriental Theatre in Milwaukee.  Featuring interviews with each band member, (and a surprise visit from one of the band member’s alter ego) the film follows the band around Wisconsin, playing in several clubs, and includes performances of 4 originals and a fiddle tune in Milwaukee’s historic Riverside Theatre, recorded and mixed by sound engineer Sam Donoghue.

“The new Chicken Wire Empire record is a technically proficient, well-crafted mixture of modern original songwriting and time earned classics. They seem to have taken on some wonderfully exciting elements of modern progressive bluegrass while also retaining their original character, born of their greater Milwaukee town roots.” – Adam Greuel of Horseshoes & Hand Grenades