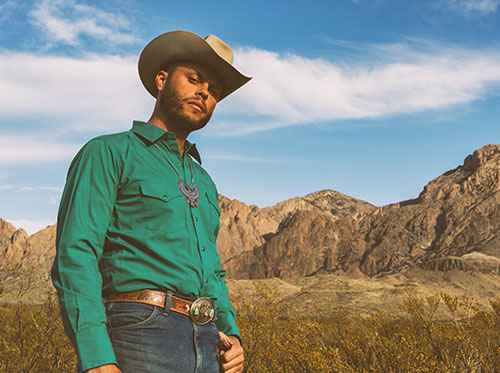 “Such a fascinating mix, very 21st century and very vintage” (NPR Music), Charley Crockett crafts his singular “Gulf & Western” sound by synthesizing country, blues, soul, cajun, R&B and other pieces of American roots music. And when his voice comes out of your speakers, there is no confusing him for any other artist. As the Wall Street Journal writes, “Mr. Crockett’s unique vocal style is one third Ernest Tubb honky tonk with clipped-word diction, one third Bill Withers low-key, soulful crooning, and one third jazzy French Quarter second-line swagger.”

Charley Crockett released his latest album The Man From Waco this fall via Son of Davy/Thirty Tigers. Crockett wrote or co-wrote all 14 songs on the album, and in many ways The Man From Waco is the purest distillation of his artistry to date. What started as a demo session with producer Bruce Robison at Robison’s studio The Bunker outside Austin, TX turned into the first album Crockett has ever made with his band The Blue Drifters backing him from start to finish. Mostly first takes with only a handful of overdubs, The Man From Waco finds Crockett refining his “Gulf & Western” sound which continues to captivate an ever-growing legion of fans.

“I just wanted an honest partnership: do it at your place, live to tape, everybody in the room,” Crockett says of the recording experience, and Robison was happy to accommodate. “The magic is in the performances on that tape. That’s what Bruce wanted to do, that’s what I wanted to do. When we were done, I said ‘these are masters, not demos.’”